After Bangabdnhu’s capture by the Pakistani military on 26th March 1971, four companions of Bangabandhu, Tajuddin Ahmed, Syed Nazrul Islam, M Mansur Ali and AHM Qamaruzzaman took the baton of leadership and kept the struggle for independence go on in every front. These four leaders were members of the Mujibangar cabinet and organized the campaign abroad in favour of the armed struggle in 1971. After liberation, Bangabandhu was elected as the president of Bangladesh and these four leaders took responsibility of major ministries. In 1975, the anti-liberation force assassinated Bangabandhu at his home and they offered the four leaders to be a part of the military government. But all four of them declined the offer knowing the result will be execution. The Mostaq regime brutally killed the four companions of Bangabandhu in jail on 3rd November 1975 shortly before another military coup. 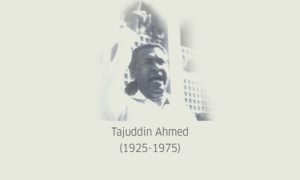 Tajuddin Ahmed, Bangladesh’s first Prime Minister, was born on July 23, 1925, in Kapasia Thana of Gazipur District. In 1943, he joined the Muslim League. On 4 January 1948, Ahmad joined East Pakistan Student League as a founding member. During the language movement in 1952, he organized protests and other activities and was arrested by police and imprisoned for several months. In 1953, he obtained a Bachelor of Arts degree with honours in Economics from Dhaka University in 1953. From 1953 to 1957, he served as the cultural and social welfare secretary of Dhaka district Awami League. In 1966, He was elected as the General Secretary of Bangladesh Awami League. Tajuddin was elected as the Prime Minister for the Mujibnagar government and played a very crucial role in organizing the armed struggle. Tajuddin led the efforts to organize a guerilla insurgency of Bengali civilians and armed forces and win international support. He was a key figure in supervising and mandating war efforts; and initiated numerous diplomatic and cultural missions which toured world capitals advocating the Bangladesh cause. He presided over the Bangladesh Sector Commanders Conference 1971 which formed the Bangladesh Armed Forces Ahmad would regularly visit the liberated regions of Bangladesh and inspire the Mukti Bahini and other freedom and raise moral. After independence, Tajuddin was appointed as the Minister of Finance and Planning. In 1975, after the assassination of Bangabandhu, Tajuddin was placed under house arrest. On 22nd August, he was arrested with other political leaders by the regime of the new president Khondaker Mostaq Ahmed and imprisoned at the Dhaka Central Jail.  On 3rd November, he was killed along with his other Mujibnagar government colleagues by a group of army officers instructed by the then President Mostaq.

Syed Nazrul Islam was born in 1925, Kishorganj District (then Mymensingh District). He was a student of the University of Dhaka and obtained degrees in History and Law. He joined politics in 1952 through the language movement. In 1957, he was elected as the President of Mymensingh District Awami League. He was an active advocate of the Six Points demand and became a close confidante of Bangabandhu during the movement. In 1964, he was elected as the senior vice president of the central committee of Awami League. During 1966-1969, he held the responsibility of the acting president of Awami League as party chief Bangabandhu Sheikh Mujibur Rahman was in jail. He was elected as the Vice-President and officiated as the acting President of Mujibnagar government as the elected President Bangabandhu Sheikh Mujibur Rahman was in jail in 1971. Syed played a key role in leading the nationalist cause, co-ordinating the Mukti Bahini guerrilla force and winning support from India and other nations.  After liberation, he was appointed as the Minister of Industry under the leadership of Bangabandhu Sheikh Mujibur Rahman. Syed Nazrul Islam was appointed as the Vice-Chairman of BAKSAL in 1975. After the assassination of Bangabandhu, he was arrested on August 23 and was killed brutally in Dhaka Central Jail on November 3. 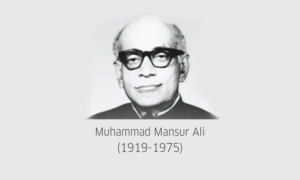 Captain M Mansur Ali was the Minister of Finance of the Mujibanagar government. He was born in 1917. He was pursuing an MA degree in Aligarh Muslim University before the separation of India and Pakistan. He served as the vice-president of Pabna District Muslim League from 1946 to 1950. He also joined Pakistan Army and before retiring, he attained the rank of Captain. M Mansur Ali was an activist during the language movement in 1952 and was arrested. In 1954, he was elected in the United Front election. During the six-point movement Mansur played an important role. After the independence of Bangladesh, Mansur was the minister of communications and later home affairs. During the BAKSAL government in 1975, M Mansur Ali was appointed as the Prime Minister. He played a key role in organizing Bangladesh Krishak Shramik Awami League. After the 15th August coup, masterminded by Khandakar Mostaq, M Mansur Ali got the offer to join the government too. He declined the offer and arrested. On November 3rd of 1975, he, along with his other companions, was killed inhumanly in jail. 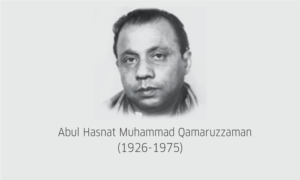 Abul Hasnat Muhammad Qamaruzzaman was the Minister for relief and rehabilitation in the provisional government of Bangladesh formed at Mujibnagar.  After liberation, he won the first parliamentary election of independent Bangladesh and became the first home minister of Bangladesh. Qamaruzzaman was born in 1926 and joined Awami League in 1956. He was elected to the National Assembly of Pakistan in 1962, 1965 and 1970. He had a luminous educational history. He obtained a degree in Economics from the University of Calcutta and a law degree from Rajshahi University. In 1974, Quamaruzzaman resigned from cabinet to serve as President of Bangladesh Awami League. In 1975, before the assassination by the Mostaq regime, he was appointed as the Minister for Industries and a member of the Executive Committee of BAKSAL.